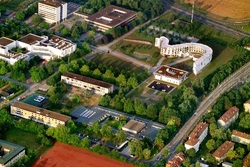 Speyer is located in the state of Rhineland-Palatinate on the Rhine River near Heidelberg. Founded in 1947 by the French government, Speyer University has become Germany's only university solely dedicated to the administrative sciences in the areas of post-graduate studies, research, and continuing education. Speyer is the only German public university that is jointly run by all German states and the German Federal level. (Usually universities are a matter of the states, i.e. regional competence in the German federation.) Speyer University is also the only post-graduate German university dedicated to research and executive teaching. Around half of its students are German officials from federal and state ministries who get a particular training in view of their future responsibilities. To its former students it counts the current minister of the interior, Dr. Thomas de Maizière, the minister of the environment of the Saarland, Anke Rehlinger, and the vice-president of the Christian Democratic Party, Ute Vogt, to name just a few. As the German University of Administrative Sciences, Speyer is often compared to the French École National d’Administration that is, by the way, a close partner. Speyer is not a “normal university”—but a modern interdisciplinary post-graduate university. The professors teaching at Speyer are from economics, finance, law, management, political sciences, sociology and history. Speyer has a distinguished reputation in the German educational sector and among German state and federal ministries and other public authorities. Moreover, a major focus of the curriculum is on economics, public finance and international economic policy-making and institutions. Speyer is the German partner institution of more than fifty national academies of public administration or university policy schools worldwide.